At over 68,000 square kilometres of rugged northern wilderness, the Peel Watershed in northern Yukon is one of the largest unroaded natural areas in the world. For the four First Nations who call it home, the pure rivers and majestic mountains of the Peel have provided physical and cultural nourishment since time immemorial. 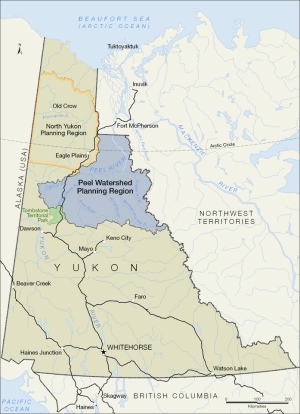 This wild place is under threat. The Peel Watershed contains deposits of oil, gas, coal, uranium and other minerals, and for years the people of Yukon have been pushing back on the Government of Yukon's efforts to carve up the region with mining, drilling and roads. First Nations and conservation groups have taken their fight all the way to the Supreme Court of Canada. Sign the Peel Pledge to show your support or protecting the Peel.

An Endangered Wilderness in Canada’s North

From its dramatic mountain peaks and sweeping sub-Arctic tundra, to its sprawling alpine meadows and pristine boreal forest, the Peel is a rare place where nature continues to be limitless. Larger than the entire province of Nova Scotia, the Peel abounds with life, anchored by seven crystal-clear rivers that drain into the sea.

Grizzlies, wolves, moose, caribou and lynx roam free on this wild land, while millions of migratory birds find sanctuary in the abundant wetlands during their epic seasonal journeys. The Porcupine Caribou make the longest annual land mammal migration on Earth from the wintering grounds in the Peel to their calving grounds in Alaska. The unspoiled landscapes of the Peel are a refuge for plants and animals who must adapt to the disruptions brought on by climate change.

First Nations and the Peel Watershed

The Peel Watershed is the traditional territory of three Yukon First Nations – the Na-Cho Nyk Dän, Tr’ondëk Hwëch’in and Vuntut Gwitchin – as well as the Teetl'it Gwich’in of the neighbouring Northwest Territories. For thousands of years, these indigenous groups have hunted, fished, travelled and lived through all corners of the Peel Watershed, reflected in age-old stories and deep knowledge of the land. Throughout the Peel are numerous hunting trails and burial sites, as well as archeological evidence of abandoned settlements and trading posts.

Still today, sustainable use of the watershed is the backbone of remote northern communities such as Old Crow and Fort McPherson. Pollution of rivers from mining operations or destruction of caribou habitat from oil drilling could devastate the ability of First Nations to continue living off the land and erode their cultural identity.

Our Journey to the Supreme Court of Canada

The Final Agreements signed with the Government of Yukon and the Government of Canada guarantee First Nations a decision-making role on their traditional territory, including the Peel Watershed. Even before land use planning began for the Peel, First Nations elders were advocating for 100% protection of the region. Over the course of seven years, an appointed commission conducted extensive research and consultation with all stakeholders to produce a Peel Watershed Land Use Plan, ultimately recommending that 80% of the region be off-limits to roads and industry. This plan was supported by First Nations and the large majority of the Yukon public.

But at the last minute, the Government of Yukon derailed everything, rejecting the Final Recommended Plan and pushing through its own plan to industrialize 71% of the Peel, leaving just a small portion protected. This betrayal sparked legal action from the affected First Nations, CPAWS Yukon and the Yukon Conservation Society.

The government's disregard for the First Nations agreements and the ecological integrity of the Peel brought together Yukoners in unprecedented ways, with rallies, demonstrations and fundraisers across the territory. 'Protect the Peel' bumper stickers began to populate people's vehicles and the Peel emerged as a top issue in the Yukon Legislature and during elections.

Yukon courts have found that the Government of Yukon violated its constitutional obligations. However, the current ruling from the Court of Appeal grants the government a do-over on its misconduct, leaving the door open to widespread development in the Peel. In June, the First Nations and environmental groups were granted leave to appeal by the Supreme Court of Canada, which heard the case in March 2017. The ruling will require a landmark interpretation of Yukon’s modern-day treaties and could determine whether this great wilderness is protected for future generations.

The Supreme Court of Canada unanimously ruled that the Yukon Government did not adhere to the Umbrella Final Agreement and therefore must go back and complete meaningful consultations on a land  use plan that protects 80% of the watershed. Since that decisive ruling, the Peel Watershed Planning Commission’s Final Recommended Plan has been under review by the Yukon government. Yukoners will have the opportunity to comment on the final plan during the final consultation period, which is expected to take place in Fall 2018. This ruling also impacts the future of land use planning in the Yukon, as it sets a precedent for how the Yukon Government should act with First Nations in the future.

Moving Forward after the Supreme Court of Canada

The ruling by the Supreme Court of Canada was an incredibly victory for the affected First Nations, the Yukon Conservation Society, CPAWS and the Yukon Territory as a whole. This, however, does not mean the Peel is fully protected yet. The ruling sent the land use planning process to a point where meaningful consultations must be carried out. Going forward, Yukoners will need to come out for final consultations and continue to pressure the Yukon Government to protect at least 80% of the Peel Watershed. 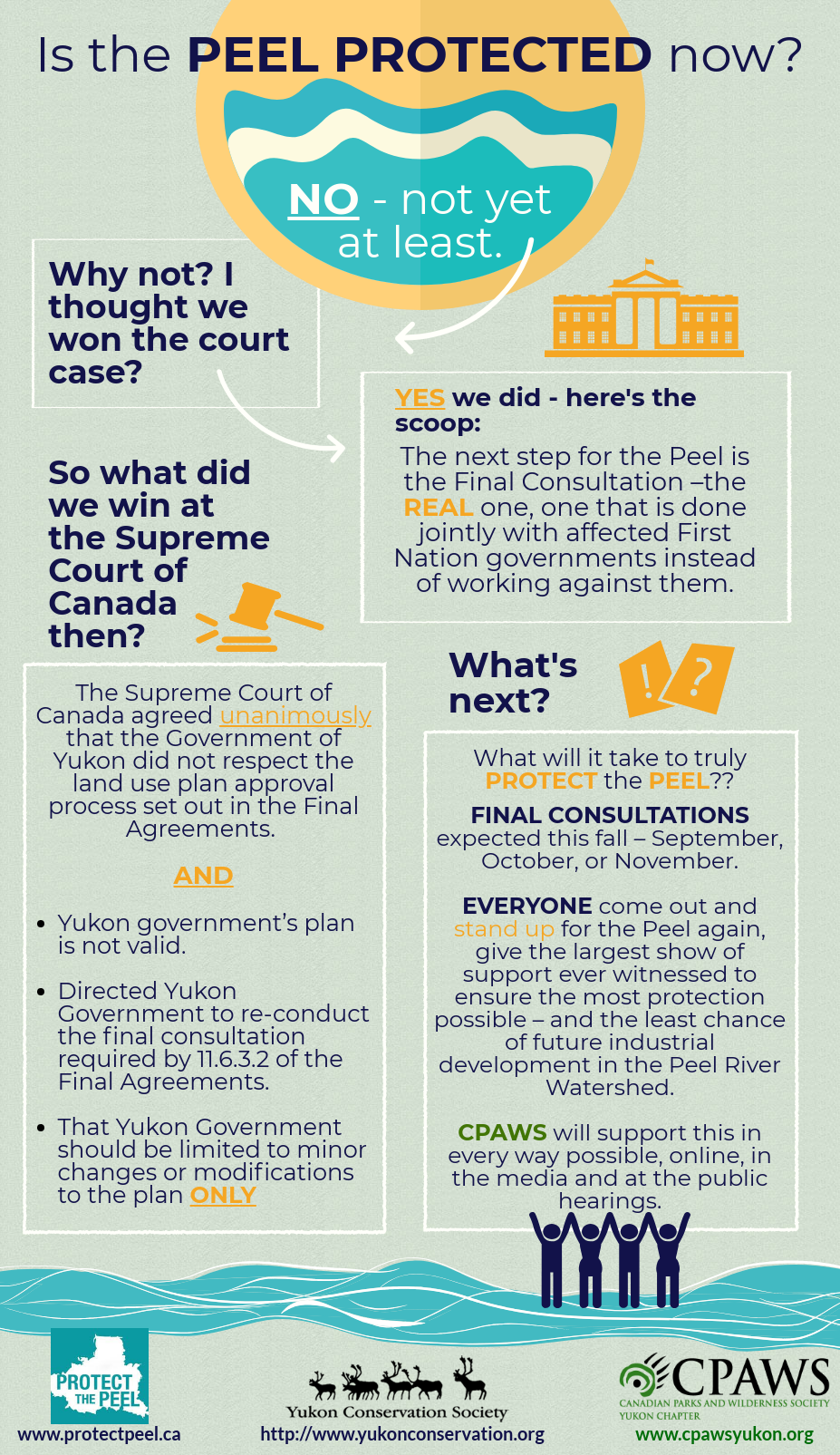 View the background in a timeline.